Sept 28 th is  the start of Week 17 of our CSA.  If you missed this last week’s CSA pick up at the markets, please don’t use the following week as a make-up week without getting an OK from us first. We don’t want to run short on shares at market.

Click here to shop our web-store – our freezers are re-stocked! Bulk Hot Peppers are ready for pickling and Leafy Chinese Cabbage is ready for your kimchi experiments!

Another successful Farm Fall Party under our belts. We cranked out lots of burgers and dogs, made apple cider and had a small fireworks display too! Thanks for coming and enjoying some time on the farm!

Life on the farm Part 4 – by Tim Time

What are People For? Have we saved the best for last? Of all the creatures on the earth, we should be best able to understand human beings and yet, this too is complicated. Learning how to be a successful person is a life’s journey with many wrong turns along the way. And even if you manage it, the rules change constantly; people change, families change, neighborhoods change, technology changes and the weather changes daily. By and large, we thrive by learning to enjoy the good times and hunkering down in the tough ones.

One of the enjoyable parts of my days at the farm is watching Olivia (6) and Evelyn (10) grow up in the home/farm setting.

On the surface they seem a lot like other kids their age. They are bright and less cautious than adults; more curious, eager to learn, quick with a smile and a silly joke. Unlike kids from an urban or even suburban setting, they are immersed in a diversity of intelligent life beyond pets and people.

The other day, when I got to the farm, Evelyn was on the patio pushing a baby stroller. I expected to see a baby doll inside, but instead, swaddled in blankets, was a two-day old piglet. 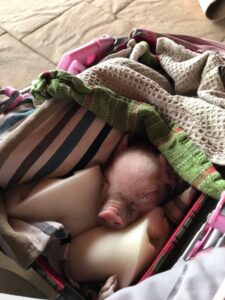 No American girl doll here. She explained that the piglet’s ear was scratched up, so he (or she) was getting special treatment. Soon it will be back in the barnyard mud with the others. 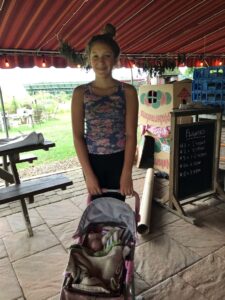 There is no better book to read, nor one better written than Charlotte’s Web by E.B. White. It is a master class in the lessons of farm life and growing up. It tickles me to no end when I hear Greg call Olivia, “Fern”. Note: look for interviews with Olivia and Evelyn in future issues of the newsletter. White shows us that farm life does not hide harsh realities. Some piglets die because their mother kills them. Some chickens get killed by racoons. Pigs and chickens are sent to the butcher. Farm life gives these girls a practical, natural hardiness that reminds me of our ancestors.

At the age of 8, Ulysses Grant (whose grandfather Noah lived near Greensburg for awhile) would hitch a team of horses to a wagon and drive it through unsecured territory delivering wood. In his own words: “We had, among other lands, fifty acres of forest within a mile of the village. In the fall of the year choppers were employed to cut enough wood to last a twelve-month. When I was seven or eight years of age, I began hauling all the wood used in the house and shops. I could not load it on the wagons, of course, at that time, but I could drive, and the choppers would load, and someone at the house unload. “

Perhaps it was not uncommon for a boy of that age to do this type of chore back then, but it is impressive, nonetheless. Practical hardiness. Ironically Grant’s father lived for a time with the family of John Brown. Two years before the Civil War, Brown led an attack on the arsenal at Harper’s Ferry, WVA. He tried to instigate a slave revolt in Southern states by arming them with stolen guns. “Brown was a boy when {my father} lived in the same house, but he knew him afterwards, and regarded him as a man of great purity of character, of high moral and physical courage, but a fanatic and extremist in whatever he advocated. It was certainly the act of an insane man to attempt the invasion of the South, and the overthrow of slavery, with less than twenty men.” Grant wrote in his memoirs.

The best-known image of John Brown is a mural called Tragic Prelude painted by John Steuart Curry located in the Kansas State Capitol building in Topeka, Kansas. It shows Brown at the heart of the fight over slavery. 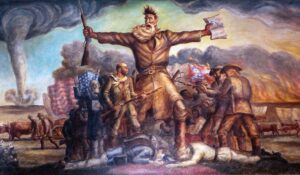 It was also used as the cover art for the first album by the rock band Kansas, which is an inspirational classic.

While I have not seen the girls of Blackberry Meadows delivering wagon loads of wood, I have seen Olivia driving the golf cart around the farm like she means it. And Evelyn has already made a couple of presentations to city schools to tell other kids about growing up on a farm. I suspect their life on the farm will serve them well.

Greg, Jen, Mary, Annie and Demetrius are some of the other regular suspects found here. They all seem to relish hard work and fresh air. There is something restorative about being immersed in the day-to-day turn of the season; embracing a frosty day in Spring because you know how the Summer sun will beat you down, watching tiny piglets sleeping in a pile to stay warm in March and romping in the field in July, mending the same fence that you mended last year because vines and weather conspire to pull it down.

In contrast to today’s increasingly fast pace, farm life puts its people into cycles that repeat slowly and inevitably, leaving time to reflect and react. Farm life leaves room to be sentient, to be aware of being aware, to find harmony with other forms of life – even insects.

Stock up on bacon & sausage for Fall and Winter. Shop our Farm Store products online for pick-up Saturdays at Mayfly Market & Deli in the North Side from 12 pm–12:15 pm, and in the East End at Engine House 16 - Side white door facing N. Lang 4 pm–4:30 pm.