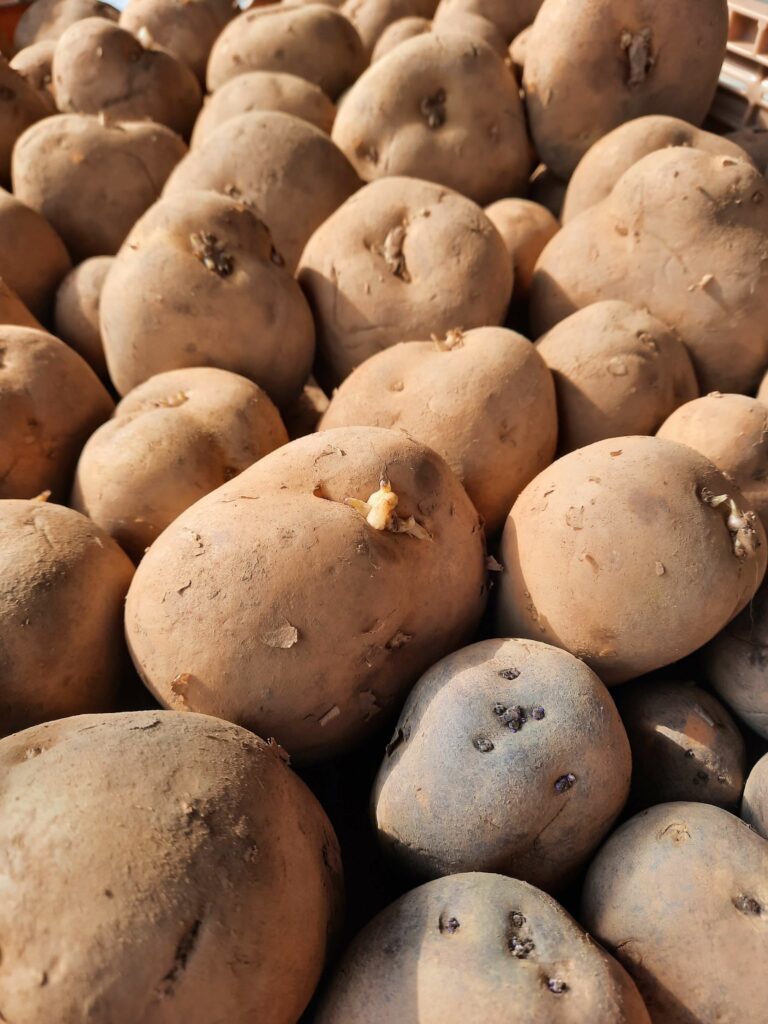 You can place your order here for pick up at:

***If you miss the pick up window, please get in touch to schedule another time***

What a refreshing spring rain we had last night! Saturday, we spent the day dragging around irrigation, hooking up hoses, fitting pipes, and attaching sprinklers. It feels like only weeks ago that we dragged all the irrigation out of the fields for winterizing and we’re back at it again. Lesson learned – just leave well enough alone. The sprinkler system isn’t yet standardized, so when the hoses, pipes and tubes were all laid out in the fields, we discovered that they were in the wrong place. Each set of sprinklers has its own section to be in. No flip flopping. When winter comes around, we’ll just get the air-compressor out and blow out all the irrigation tubing so there’s no damage from freezing.

For those that have been “long-time” readers, you’ve heard me mention the magic of irrigation installation. It hasn’t failed us yet. After (collectively) 8 hours of screwing around with irrigation, Mother Nature provided us with a magnificent slow, steady, all night rain. It never fails. Set up the irrigation and it’ll rain. This morning, the peas are jumping, the scallions are perky, the lettuce crisp and the yet-to-emerge beets, spinach, radishes and arugula are gearing up for their solar debut!

It’s the time of year where we move seedlings from the greenhouse to the “hardening off hut”. They leave the tender confines of the greenhouse to the great outdoors, where they toughen up and get used to a little less water, a little more sun and greater temperature fluctuations (and the occasional onslaught of wayward hens). After about a week of this, they progress to the growing fields, where they get guidance and prods from me, but are pretty much on their own until harvest day.

Greg’s been on a mission to convert our lard (which takes up epic amounts of room in our freezers) to a more store-able product… soap! This last round of soap (lavender) he cranked out 135 lbs!! If you feel you have a particularly good knack of selling large quantities of soap, feel free to reach out. How about this: “Try our STY-lish soap! Make Pittsburgh Clean Again!”

This is a cool-processed soap, so it needs to sit and cure for a couple of weeks before we put it up for sale. We’ll let you know when it’s posted to the website.

We’re chitting our potatoes this very moment! Before you plant your potatoes, (according to some) you’re supposed to chit potatoes to encourage early sprouting. We take our seed potatoes and place them rose end up (stem end down) in trays in a warm and lighted room. This forces the eyes of the potato to sprout and get a jump on production. After the eyes have sprouted, the potatoes are cut into sections, allowed to form a scab on the fresh cut and then planted. We’re growing 3 types of potatoes (white, red and blue) this year and we’re hoping they will be productive!! We’re going to plant some potatoes near the farmhouse in a big cardboard box that pumpkins and watermelons come in. Our farm families can come by, check on the potato growth, and add compost to the bin as the potatoes grow. At the end of the summer, we’ll dump it out and you all can help find all the potatoes!

Stock up on bacon & sausage for Fall and Winter. Shop our Farm Store products online for pick-up Saturdays at Mayfly Market & Deli in the North Side from 12 pm–12:15 pm, and in the East End at Engine House 16 - Side white door facing N. Lang 4 pm–4:30 pm.